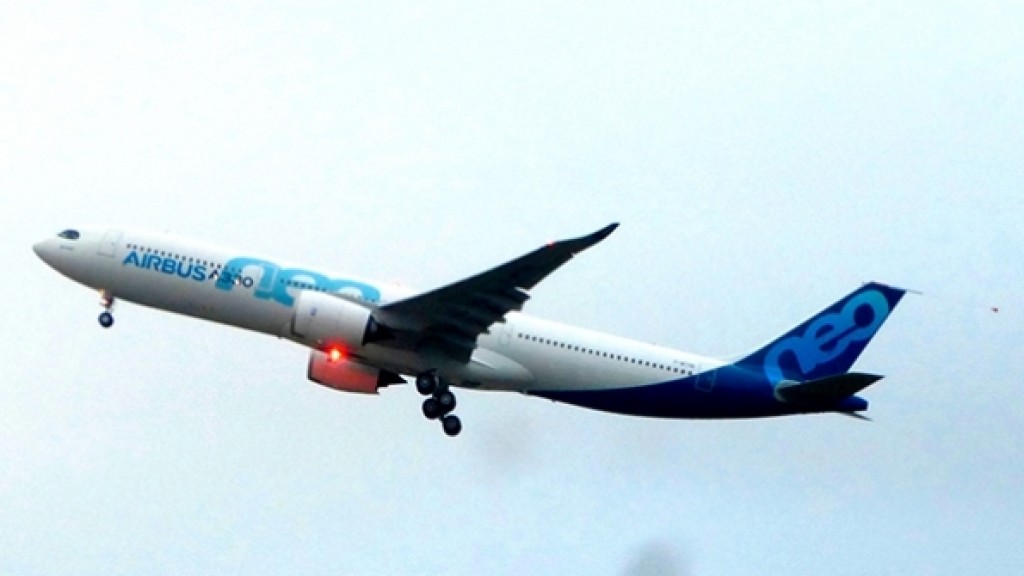 “will enter service probably around mid-2020”

The first Airbus A330neo test aircraft—powered by Rolls-Royce Trent 7000 engines—took off on its maiden flight from Toulouse-Blagnac Airport Oct. 19 and flew over southwestern France. The aircraft, MSN1795, is an A330-900 and the first of three certification flight-test aircraft to fly.

Airbus COO and president of Commercial Aircraft Fabrice Brégier told journalists on the sidelines of the event that Airbus has decided to increase the maximum takeoff weight (MTOW) from 242 to 251 tonnes of the aircraft, “which will enter service probably around mid-2020, because we have to change a few things regarding the landing gear and braking system, but these are what I call minor and controlled modifications.”

Brégier added the 251 tonne-MTOW will increase the aircraft’s range by 700 nautical miles “compared to the aircraft that just took off,” and an additional 1,000 miles compared to the current A330ceo. “The increased MTOW will allow the aircraft probably to [fly nonstop] with fuel loads for example from Kuala Lumpur to London,” Bregier said.

Overall, the full A330neo family flight-test campaign will be performed by three certification flight-test aircraft, plus the first production aircraft (the latter to validate the Airspace cabin prior to entry into service).

Launched in July 2014, the latest generation of Airbus’ widebody family, the A330neo builds on the A330’s proven economics, versatility and reliability while reducing fuel consumption by a further 14% per seat.

The neo’s two versions—the A330-800 and A330-900—will accommodate 257 and 287 passengers, respectively, in a three-class configuration. Powered by the latest-generation Rolls-Royce Trent 7000 engines, they can accommodate up to 10 more seats, offer new Airspace cabin amenities, and feature a new larger span wing with Sharklet wingtip devices.

“The first aircraft is expected to be delivered in summer 2018 to TAP Portugal,” Bregier confirmed.