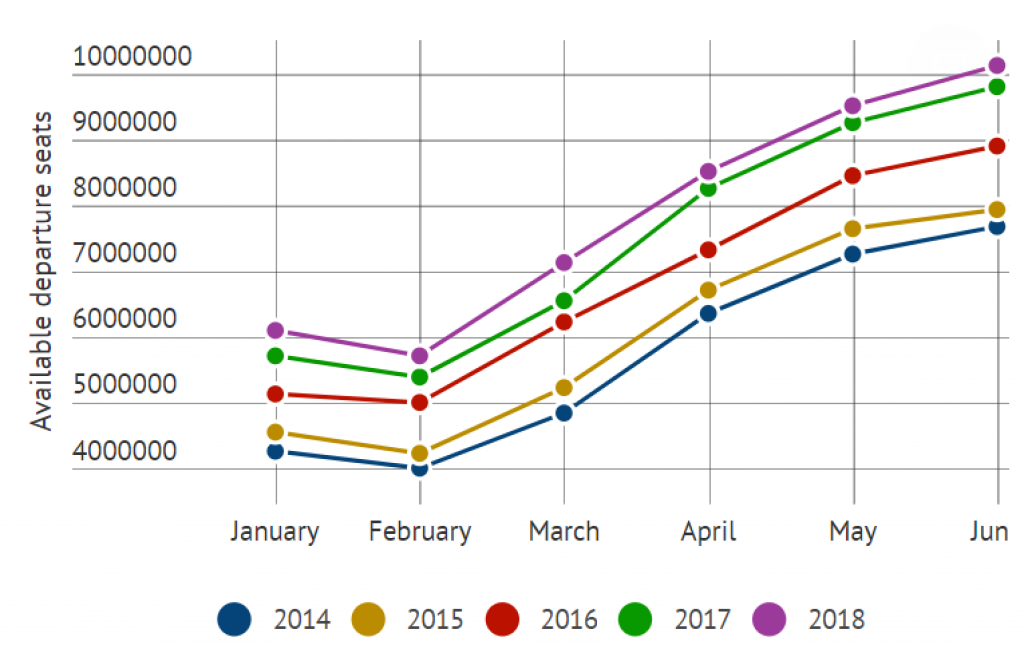 Routesonline’s analysis of published schedules for the past ten years shows that international air capacity from Spain rose from 65.1 million available seats in 2008 to 98.5 million in 2017. This represents growth of 51.3 percent across the period. In the last calendar year, international capacity increased by 8.3 percent after adding more than 7.5 million available seats.

International traffic trends in Spain during the first-half

A closer look at flight schedules for the first half of 2018 shows that international air links from Spain are continuing to grow. According to OAG Schedules, more than 44 million seats are on offer during the six months to June 2018, compared with 42.1 million for the same period a year ago. In June 2018 there will be in excess of 10 million departure seats from Spanish airports, up 6.4 percent on the same month in 2017.

A total of 139 airlines offered international flights out of Spain in 2017, with European budget carrier Ryanair accounting for almost 18.3 million – or 18.6 percent – of the 98.5 million departure seats on offer.

The second largest number of departure seats by airline was offered by Ryanair’s low-cost rival EasyJet, with more than 8.4 million seats, with Spain’s flag carrier Iberia in third. Vueling, the sister airline of Iberia, ranked fourth and Norwegian fifth.

Austrian carrier NIKI ranked as the fastest-growing major airline in Spain’s international market during 2017 after taking over the holiday destinations from Air Berlin in March of last year.

Prior to its insolvency in December 2017, it offered up to five daily flights from Dusseldorf, Cologne, Berlin, Munich, Stuttgart, Hamburg and Frankfurt to Palma de Majorca.

The carrier also added Málaga and Alicante to its route map, as well as Tenerife and Gran Canaria, Fuerteventura, Lanzarote and La Palma.

Eurowings ranked second, after taking over many routes previously operated by Germanwings, with Primera Air in third.