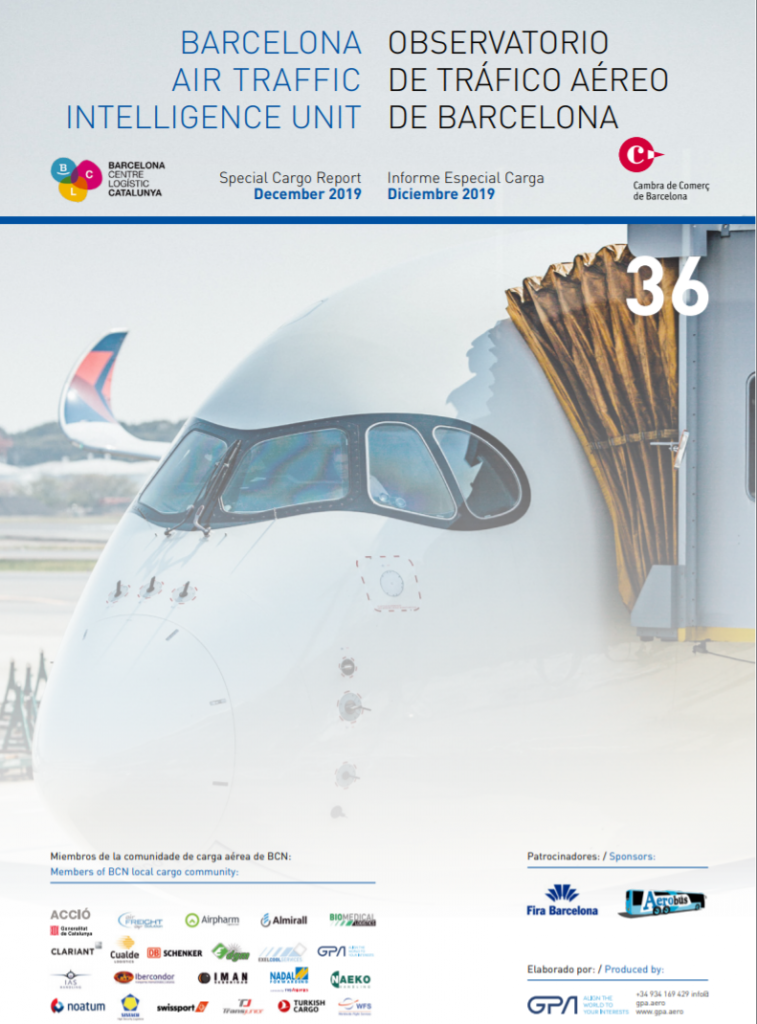 BCN remains in the Top 25 of the European cargo airports according to ACI in 2019 (Jan-Sept 2019 data). During this period, both BCN and MAD are two of the six airports that grow, although they do so at a lower rate than the previous year. The airport with the highest growth in the Top 25 is LIS (+ 13%), also located in the Iberian Peninsula.

The 5 largest European cargo hubs (FRA, CDG, LHR, AMS and IST) move 47% of the total air cargo in the region, although all of them decrease in JanSept 2019 period compared to 2018. Amsterdam airport stands out especially, which falls by 9% in that period. Some of the Dutch cargo traffic could have moved towards Liège (LGG), which grows by 3%, unlike the negative trend in its surroundings.

ELECTRICAL PRODUCTS AND FOODSTUFFS LEAD THE GROWTH IN CATALONIA.

Catalonia continues to lead the national air cargo for pharma and chemical products, although decreases its share with respect to Spanish total market (from 43% in 2017 to 40% in 2018). This sector moderates its annual growth (+5.6%), compared to the previous year (+20%).

Important growth in fashion (+14.0%), electrical products (+16.2%) and foodstuffs (+14.6%), although there is a decline in machinery and manufactures transported by air (-4.9%). The pattern is similar at Spanish level.

BCN air exports first destination is the region of Asia Pacific / North Asia (37%). The rest of regions are fairly distributed between North America (20%), Latin America (18%) and the Middle East / North Africa (15%). Note that, although exports to Sub-Saharan Africa do not have a great relevance with respect to the total (5%), they represent 48% of Spanish air exports to that region, significantly improving this indicator compared to the previous year (38 %).

The first 5 destinations of goods leaving BCN are JFK, MEX, PVG, DXB and ICN. Although New York airport holds the first place, the Emirates hub (DXB) decreases 9%, so it drops to fourth position in the ranking. Seoul Airport (ICN) enters in the ranking due to its spectacular growth (+ 40%), taking advantage of the good direct connectivity offered by Korean Air and Asiana.

MIDDLE EAST, NORTH AMERICA AND EUROPE ARE THE REGIONS WITH ENOUGH DIRECT FLIGHTS TO FACE THE DEMAND

In relation to the first flight segment, that is, considering the first airport where freight stops after leaving BCN, 40% makes a first stopover in Europe. In this region, Cologne (CGN) and Istanbul (ISL) stand out as the first stopover point from BCN.

Worldwide, the airports which lead the reception of goods from BCN for the first transport segment are located in the Middle East (DOH and DXB). Many of these goods will subsequently link to the Asia-Pacific and North Asia.

During the peak month of October, exports from BCN to North America stand out, which grow up to 44% from the monthly average to that region.

The months of October and November are the only ones that are above the monthly average for exports from Barcelona airport to all world regions.

In 2019, Qatar Airways has achieved the first position as the airline that handles more cargo traffic in BCN (12.2%), surpassing Emirates (11.8%) for the first time and moving it to the second position.

The volume of cargo managed by integrators or couriers (UPS, DHL and FedEx) continues to be significant (22.0% of the total airport). Within this group, UPS (9.7%) and DHL (9.4%) stand out, which maintain a considerable advantage over the third party, FedEx (2.8%).

The launch of direct routes to Seoul and Hong Kong (both in 2017) has promoted spectacular increases in exports from BCN to these destinations (+91% and +76%, respectively), either as a final destination or as first stopover. Even though it is not possible to evaluate the year-on-year growth of air freight to Abu Dhabi, because it is a very recent route (Nov-2018), Etihad’s strong entry into Barcelona airport (5th position in cargo 2019) suggests future growth for this route.

The significant growth of Barcelona airport in terms of passenger intercontinental routes during last 5 years, explains cargo growth year after year (belly cargo). On the contrary, goods transported in freighters has remained stable, although it has increased its market share in 2019, representing 26% of the total.

From January 1st 2019, the digital AWB (e-AWB) became the default contract for air transport (it was previously the paper format). Since that date, the use of e-AWB worldwide for authorized air routes has increased significantly, from 60.8% in January to 66.0% in October.