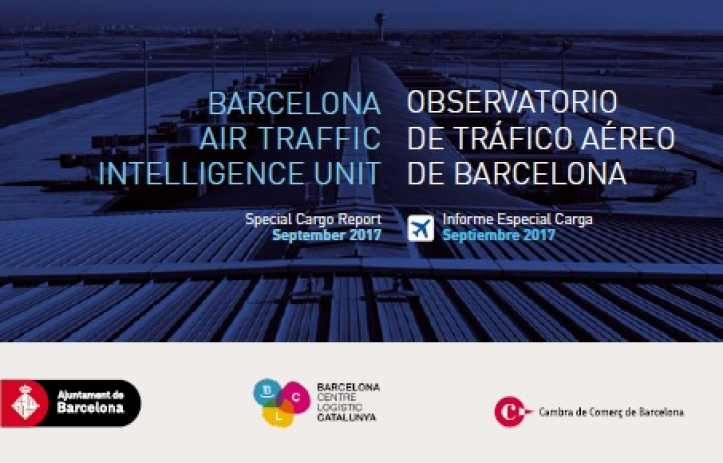 Barcelona consolidates its place in the top 20 European cargo airports and can reach 150,000 tonnes

In the last three years, air cargo at Barcelona-El Prat Airport has been very positive. This evolution has led the airport to grow from the 100,000 to

• Growth of cargo is the result of new intercontinental links and the competitiveness of the local productive and logistic framework.

• Barcelona offers excellent opportunities for new flights with cargo capacity to Japan, India, and Mexico, markets where there is also a clear demand for passenger transport.

This growth consolidates Barcelona as one of the top 20 European cargo airports, when only five years ago it was ranked 27. This is high impact growth for the country’s economy.

The growth of Barcelona is part of a global economic recovery that has increased the demand for airfreight transport. The first half of 2017 has been the best half-year in the global airline industry for a long time, with January through June growth of over 8%. Europe leads the global growth of air cargo during 2016 (+ 7.1%) and the first half of 2017 (+ 13.6%). Current prospects for air transport are positive, especially for intercontinental transport.

The keys to the success of Barcelona

Barcelona has a number of particularities that have driven the growth of its air cargo to significantly exceed the European average, with increases of + 13.3% in 2016 and + 13.5% in the first half of 2017.

The increase in air cargo in Barcelona is mainly due to the marked increase in intercontinental air routes and frequencies from Barcelona airport, with 14 new intercontinental air routes in 2017. Having a diverse economy with four powerful cargo-generating sectors (pharmacy and chemistry, fashion, automotive, and food), having a competitive logistics sector in Catalonia, and the support of the Barcelona Air Freight Community, the community promoting cargo around Barcelona airport, has also been decisive. All these elements have been key to increasing the airport’s air cargo to 150,000 tonnes in 2017.

The increase in cargo has been driven mainly by Middle East airlines. Emirates, Qatar Airways, and Turkish Airlines dominate the direct transit between Asia and the Airport, taking advantage of their high number of frequencies and the lack of direct links between Barcelona and several of its main Asian markets. With regard to American routes, American Airlines is rapidly growing at the Airport, with five daily routes, and LATAM has seen a very positive evolution since it began operating in Barcelona in 2015. The map of Barcelona routes has expanded steadily and in 2017 it already includes 38 long-haul destinations. Most destinations are also slowly increasing frequencies. This growth has clearly contributed to the increase in air cargo at the Airport.

Catalonia: growth and opportunities above the Spanish average

Spanish air cargo is dominated in volume by the fashion sector, which represents 34% of the total. Other relevant sectors are pharmacy and chemistry, industrial manufactures (mainly linked to the automotive industry), and food perishables.

In pharmacy airfreight, the weight of Catalonia has shot up and Barcelona is the indisputable leader in pharmaceutical and chemical product cargo, and with 2,070 million euros it accounts for 36% of the Spanish total air cargo of pharmacy and chemistry (5,800 million euros). The weight of Catalonia in exports (53% of the Spanish total) is especially relevant. This high-value premium sector (€ 100 / kg, twice the average value of Spanish air cargo) which is eminently export focused will play a key role in the evolution of global air cargo in the coming years.

North America (the United States, Mexico, and Canada) is the main international region associated with Spanish air cargo, followed by the Chinese market. Japan, one of the main Spanish export markets not covered, is especially important for Catalonia.

Air traffic in Catalonia is oriented towards Asia, while those of Spain as a whole interact with North America. The clearest opportunities for new flights with cargo capacity from Barcelona are Mexico, Japan, and India, which would benefit from a significant cargo hub at the Airport, as well as a clear demand for passenger transport.

These data and others are included in number 29 of the Barcelona Air Traffic Intelligence Unit.

The Barcelona Air Traffic Intelligence Unit is a periodical publication of the Barcelona Chamber of Commerce whose objective is to highlight the relevant trends in air traffic in Barcelona and is aimed at those who are interested in airport development.