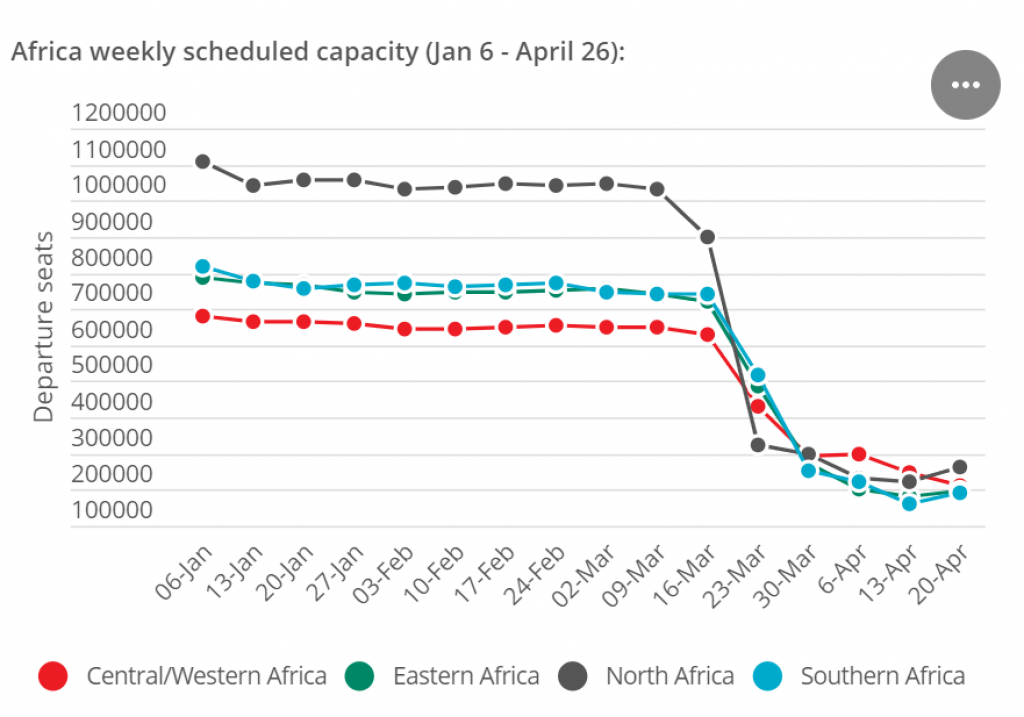 After a week when total capacity from and within the Middle East nudged up by 0.7%, the OAG figures for last week (w/c April 20) show that the positive trend was only temporary. The number of departure seats declined by 7.4% to 1.5 million. In numerical terms that equated to more than 120,000 seats.

The lion’s share of that capacity reduction came in Saudi Arabia where the total number of departure seats reduced by more than 100,000, a week-on-week decline of 14.3%. Saudi Arabia has taken several measures to contain the spread of the pandemic, with the number of confirmed COVID-19 cases in the country now topping 18,000.

Lebanon also experienced a large drop in capacity last week. Departure seats fell from 30,000 to 5,864. This meant the country’s market was almost 84% smaller than during the previous seven days.

Capacity across the continent nudged up by 5.6% last week, compared with the previous seven days, to 859,973 seats. Three out of four regions recorded growth. The OAG figures show capacity rose by 18.7% in Southern Africa, by 17.5% in North Africa and by 6.5% in East Africa.

However, there were more than 35,000 fewer seats in the Central/Western Africa region, meaning week-on-week capacity fell by 14.4%.

As with IATA’s financial forecast for the Middle East, the organisation’s estimates for Africa also make for grim reading. It found the continent’s airlines could lose $6 billion of passenger revenue compared to 2019, which is $2bn more than was predicted at the start of April.

Al Bakri said: “Airlines in Africa are struggling for survival. Air Mauritius has entered voluntary administration, South African Airways and SA Express are in business rescue, other distressed carriers have placed staff on unpaid leave or signaled their intention to cut jobs. More airlines will follow if urgent financial relief is not provided.”

Air Mauritius was placed into administration last week as the ongoing travel restrictions made it impossible for the airline to meet its financial obligations for “the foreseeable future.” The airline had already suspended services until May 15.

IATA research also found that job losses in aviation and related industries could grow to 3.1 million—half of Africa’s 6.2 million aviation-related employment. Full-year 2020 traffic is expected to plummet by 51% compared to 2019.

It said South Africa would be hardest hit, with 14.5 million fewer passengers this year resulting in a $3.02 billion revenue loss. Nigeria will also suffer a passenger drop of about 4.7 million, while in Kenya the total will be down by about 3.5 million.