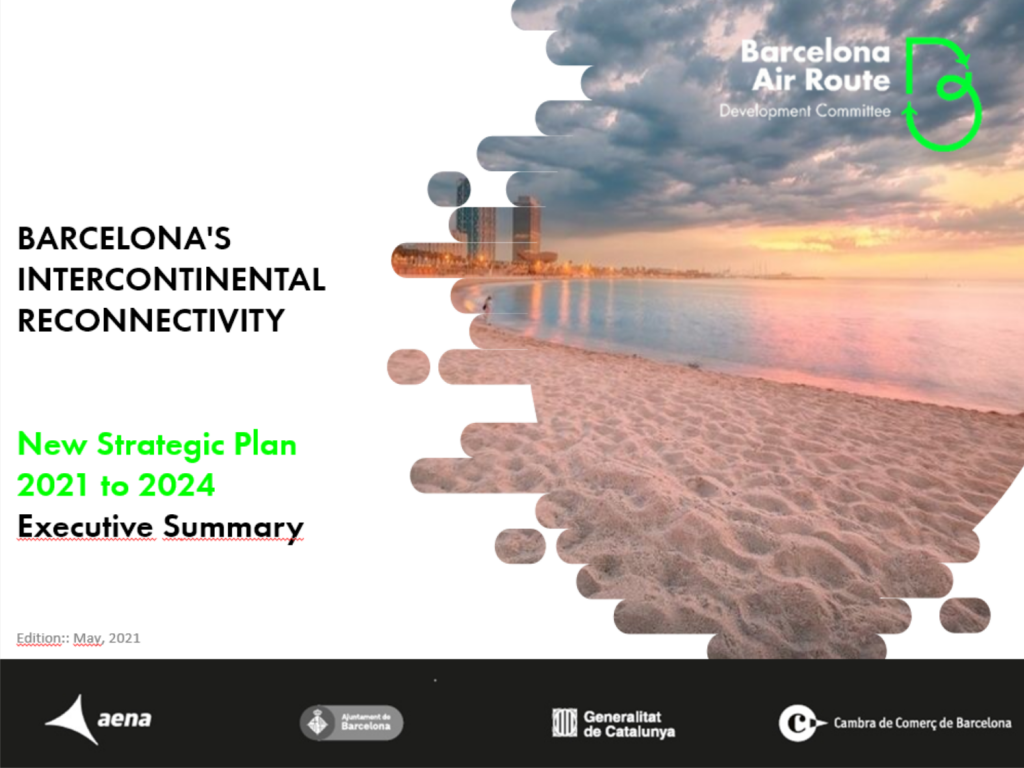 The BARDC has presented its new Strategic Plan 2021 to 2024, which has been drafted to recover the flights that have been lost as a result of the huge impact of the Covid-19 pandemic on the aeronautical sector. It is the roadmap for the next four years to help José Tarradellas Barcelona-El Prat Airport regain its intercontinental positioning after the largest drop in passenger traffic in history.

The Plan includes an assessment of the impact of Covid-19 on air routes and airlines around the world, identifying key factors for the recovery and sustainability of the airport’s flight offer, such as guaranteeing the health safety of passengers as they pass through the facilities. In this regard, the airport has obtained the Airport Health Accreditation certification from the Airports Council International (ACI), accrediting it as a safe airport.

Variation in traveler behavior across all travel segments is also considered. Business passengers may be more difficult to recover due to corporate constraints and the new strength of telecommuting; while latent demand for leisure, family, and friendship travel remains very strong according to industry surveys. In the current situation, the passenger is more flexible and travels to the regions with which there is connectivity, with proximity tourism and last-minute bookings gaining importance. Health costs (PCR tests, vaccination, etc.) can be major obstacles to the recovery of activity.

Connectivity with European and global hubs and continuous monitoring of opportunities as contingency measures.

The 2021-2024 Strategic Plan sets two essential work and monitoring objectives as contingency measures in the face of the current crisis to ensure the global accessibility of José Tarradellas Barcelona-El Prat Airport:

– Ensure connectivity with 19 major global and European hubs, as these serve as hubs for accessing any relevant destination worldwide. Many of these hubs already have direct routes and significant volumes of daily frequencies, while connectivity with the others is expected in the short term.

– Maintain constant, comprehensive monitoring of market opportunities that continue to emerge, both as a result of the total restructuring of the aviation sector and the improvement of Barcelona’s current capacity to attract travelers. Some examples could be the emergence of new low-cost long-haul routes (for which the airport has shown potential) or the recovery of congresses, trade fairs, and cruises in the Catalan capital.

Three levels of prioritization in the recovery of flights

The Plan outlines a three-stage roadmap: by 2021 and 2022, the goal is to recover the high-impact routes that will connect José Tarradellas Barcelona-El Prat Airport to destinations that are key centers for economic and cultural reasons, due to their large passenger volumes, high social impact, and access to major centers of knowledge.

In 2022 and 2023, the BARDC tasks would be oriented both towards recovering the remaining historical connectivity that existed before the pandemic and to detecting new market opportunities for operators missing from the routes and/or new companies or mergers of companies. Finally, the last phase of the plan focuses on the creation of new priority connections not served to date, the entry of new operators, and the increase in frequencies.

Likewise, the possibility is not ruled out that even in the first years of the plan there could be strategic moves by companies and restructuring of the sector that could accelerate Barcelona’s connectivity, opening up new opportunities. As is happening on short- and medium-haul routes, the arrival of new routes is not ruled out. Many times, people fly where there are not so many government restrictions, however, it is difficult to travel from places where there is great demand.

The airport is starting to recover in the European context

The situation of the airline industry in the first quarter of 2021 on a global scale is one of slight recovery, but still far from the figures before the Covid-19 pandemic. For the week of April 18, the number of flights worldwide increased by 26.6% compared to February 2021, but still represents a drop of 44.8% compared to March 2019.

With regard to all the airports in the country as a whole, recovery rates are notably lower than those of the planet as a whole. Thus, although operations during the week of April 18 grew by 22.3% compared to February 2021, in comparison with March 2019, 78.1% of flights have been lost.

Putting the focus on José Tarradellas Barcelona-El Prat Airport, it must be said that it is showing signs of recovery within the European context. By way of example, on March 1, 2021, it occupied the 22nd position in the ranking of airports with the most traffic (including Istanbul airports), while by the first fortnight of April it had climbed to 15th place.

However, its recovery is also making slow process, with an average of 78.3% fewer operations during the week of April 12-18 compared to the same period in 2019. For instance, while on April 18, 2019, there were 1,035 flights at the Catalan airport, on the same day this year the figure stood at only 246.

Focusing on intercontinental routes, it is worth noting that José Tarradellas Barcelona-El Prat Airport has regained connections to destinations all over the world, in both the Americas, and Asia, the Middle East, and Africa.

Over the past few weeks, the airlines operating at the airport have begun announcing the addition of new long-haul routes for the coming months. Starting in July, LEVEL will operate scheduled flights to Cancun, and Emirates will be resuming flights on the Mexico route.

Communication as a key tool for flight recovery

In these times of uncertainty, airlines are very attentive to taking advantage of opportunities to re-establish flights or even to making the most of temporary windows to make flights from time to time. Therefore, it is important to be in good communication with airlines so as to quickly tap the market if there is an opportunity and offer backing to support the route. To this end, the BARDC is participating in and organizing events to bring together the different actors in the aeronautical sector where it offers its services to companies that may be interested in operating at the Catalan airport.

From April 26th to 29th, BARDC participated in Routes Reconnected, a virtual event to stimulate the recovery of the aviation sector after the shock caused by Covid-19. Over these four days, the committee met with several airlines interested in resuming flights with José Tarradellas Barcelona-El Prat Airport or in offering new services.

Meanwhile, after the success of the 1st edition in September 2020, the BARDC is organizing the 2nd BCN Air Route Meeting Week. This is an initiative that will bring together the main intercontinental airlines and the economic and social actors in Catalonia virtually between May 25th and June 4th for the purpose of recovering long-haul flights.