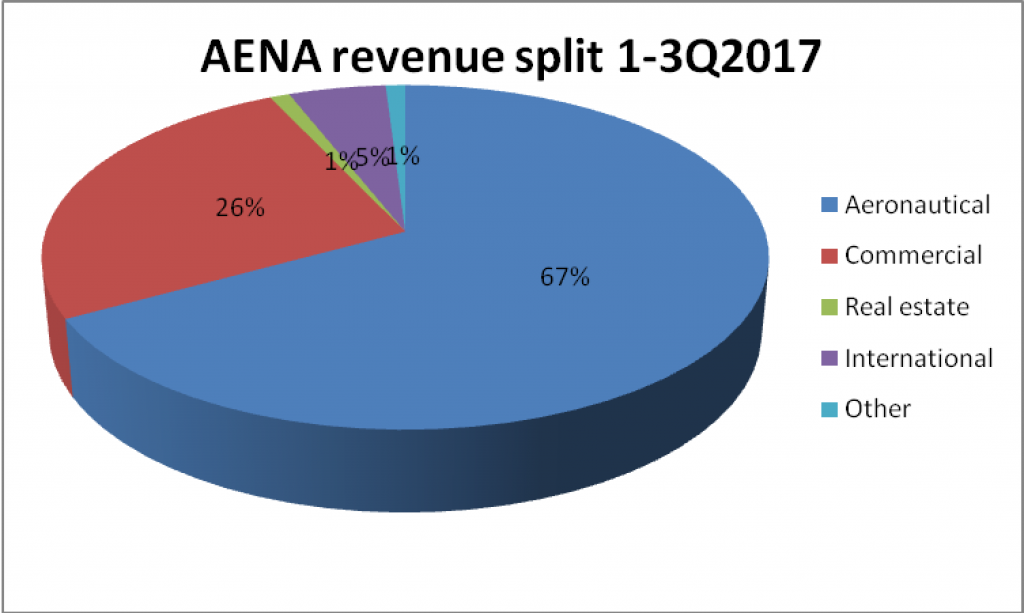 AENA again reports positive financial and operational data, but there are dark clouds on the horizon

AENA’s financial results for the three months ended 30-Sep-2017 – the primary quarter for a country, Spain, where tourism is so important to the economy (14% of GDP) – show that the organisation’s relentless progress since its partial privatisation in Feb-2015 continues.

But there are worrying developments outside its control. The northern European countries, led by the UK then Germany, are extremely important to Spanish tourism and therefore to AENA, and it is why the fall in the value of the pound, and ‘Brexit’ generally, concern AENA so greatly. With British resident expatriate figures in Spain already falling, a tail-off in UK visitors would upset AENA’s future projections.

Just as AENA is heavily reliant on business from a select number of countries, so is it also reliant on the budget airlines that carry them to Spain. Further, a major issue facing not only AENA – but in fact all the airlines operating in and into Spain, all the tourist organisations, the hotels – is the Catalonian secession crisis, and its potential to spread unrest to other regions of Spain.

As a CAPA report at the time of the privatisation pointed out, AENA’s non-aeronautical revenue generation was historically well below the 50% of overall turnover level advocated by the trade association Airports Council International (ACI).

Non-aeronautical revenues at Spanish airports then ranged between 25% and 35%, depending on the actual facility, increasing to 35%-45% as AENA geared up for privatisation. Revenue per passenger at restaurants/cafes/bars/shops at the main airports, such as Madrid, was considerably less than at comparable European hub airports such as Frankfurt, Amsterdam, London Heathrow and Paris CDG, even dipping into the EUR3-4 pp category at Madrid, compared to EUR6-7 pp at others.

Total revenues increased by 6.7%, to EUR1.2 billion, and did so in all major areas of the business with the exception of the relatively insignificant real estate services (1% of revenues).

It must be particularly gratifying to the management and to its investors that the commercial segment grew by as much as eight percentage points more than the aeronautical segment. Before its privatisation, AENA was not the boldest European operator in this sphere of activity, certainly well behind the likes of Heathrow Airport Holdings, Groupe ADP, Fraport and Aeroporti di Roma.

Operational improvements mean that commercial activities are now responsible for over 26% of turnover (+12% over 2016), although the biggest improvement (84.5% of the total) has been at the core seven main airports.

New contractual conditions that include minimum annual guaranteed rents (MAGR) are behind the increases, together with the entry into the airports of new operators with recognised experience and prestige. It should be noted, though, that commercial revenue per passenger remains low, at EUR4.2, having edged up from EUR4.0 in 2016.

Chart – the evolution of contractual MAGR at AENA airports in force, by business line, for the next five years 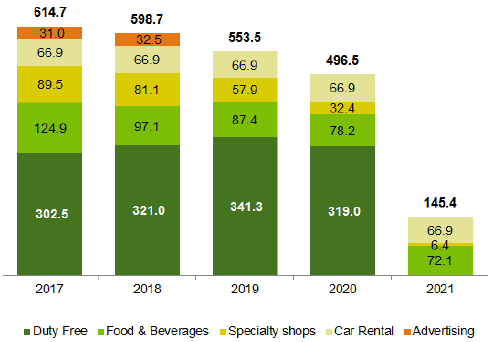 Figures in EUR millions of existing contracts as of 30- Jun-2017. Potential new contracts are not considered.

Commercial revenues on the up

There is a similar story with an increasingly important subsegment of commercial revenues, namely car parking, which contributed as little as 13% of commercial revenues and 0.12% of all revenues in the group immediately prior to the privatisation, with car park revenue per passenger at EUR0.5 on average. The income from car parks has been growing at around 8% per quarter – more than twice that of retail shops.

But that was bettered by the positive impact of the new car rental contracts in the airport network, which came into force in Nov-2016 and have increased revenue from this activity by up to 36%, aided by a new, more user-friendly online booking portal.

On the aeronautical side, the source of AENA’s passengers makes for interesting reading.

At 29.8%, the UK provides a slightly larger market share than does Spain itself. And Europe (ex-Spain) accounts for almost two thirds of the passenger total. 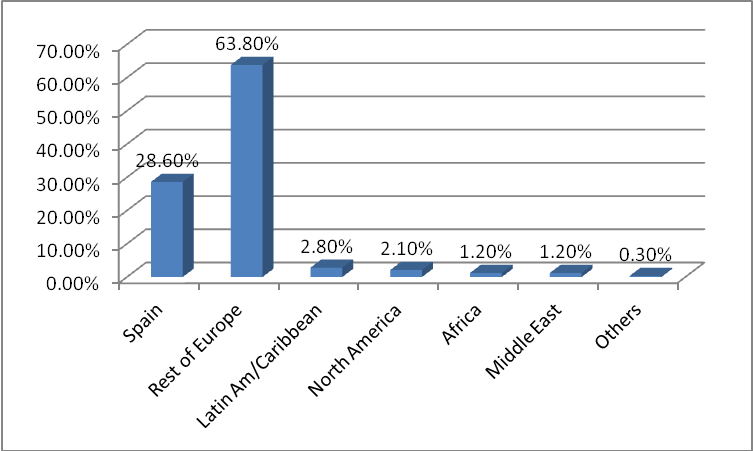 The chart below examines the European market passenger distribution in more detail.

Clearly, the northern European countries, led by the UK then Germany, are extremely important to Spanish tourism and therefore to AENA, and it is why the fall in the value of the pound, and ‘Brexit’ generally, concern AENA so greatly.

In the last week, Ireland has revealed that British visitors to that country reduced by 6.7% in the first nine months of 2017, while other markets grew (continental Europe by 3.5%). The exchange rate is believed to be part of the reason, though high accommodation and other visitor costs there may well play a part as well.

With British resident ex-pat figures in Spain already falling (though a deal on their future within the EU/UK Brexit agreement seems set to be close to signing), a similar tail-off in UK visitors would upset AENA’s future projections. However, with several Islamic country vacation resorts still ‘out of bounds’ to them, that seems unlikely in the immediate future.

Another interesting statistic is the distribution of market share by airline. Ryanair, which operates both domestically and internationally, leads the field with 17.6% of passengers, followed by Vueling, the Spanish LCC that is 90.5% owned by IAG.

Of the top 10 airlines that account for two thirds (66%) of passenger numbers, 47.5% is accounted for by low cost, or hybrid low cost airlines, while the mainstream flag carrier accounted for only 6.7%. Just as AENA is heavily reliant on business from a select number of countries, so is it also reliant on the budget airlines that carry them to Spain. 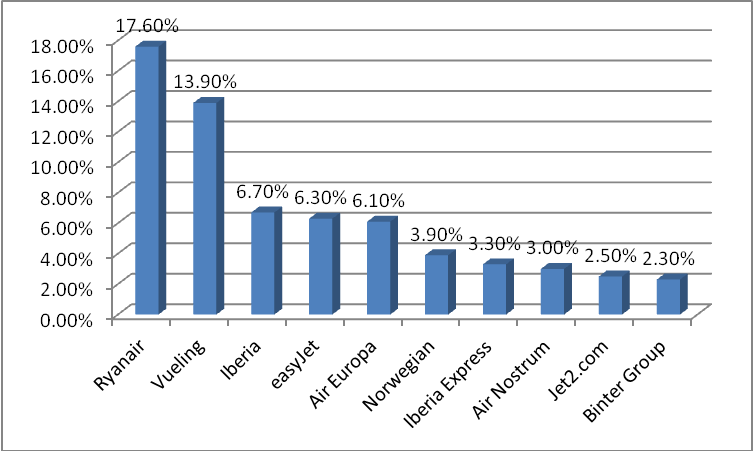 AENA has been involved in airport privatisation since the 1990s, mainly, though not exclusively, in the Spanish speaking countries of Central and South America, notably Mexico. AENA’s International division, which trades as AENA Aeropuertos Internacional, has interests in 14 airports, mainly in Mexico and Latin America, but it has historically shown little interest in Europe.

The fact that just three of the 46 airports ( Madrid Baraja, Barcelona El Prat and Palma Mallorca ) handled over 50% of AENA’s Spanish total passenger traffic in 3Q2017.

Ultimately it might opt to invest in further foreign airport acquisitions, though that may run counter to the grain of the DORA, the law under which the partial privatisation took place. International operations’ revenues accounted for 5% of AENA’s overall revenues in the reported financial period.

(The DORA was rescheduled in Apr-2017 and part of its remit is to provide incentives for traffic at the airports with the least traffic, and to reduce the seasonality of airports which are highly seasonal).

Further privatisation of AENA, possibly through a secondary public share flotation or by attracting another core investor, has been mooted for over a year now. The likelihood of that happening under these circumstances is very low.