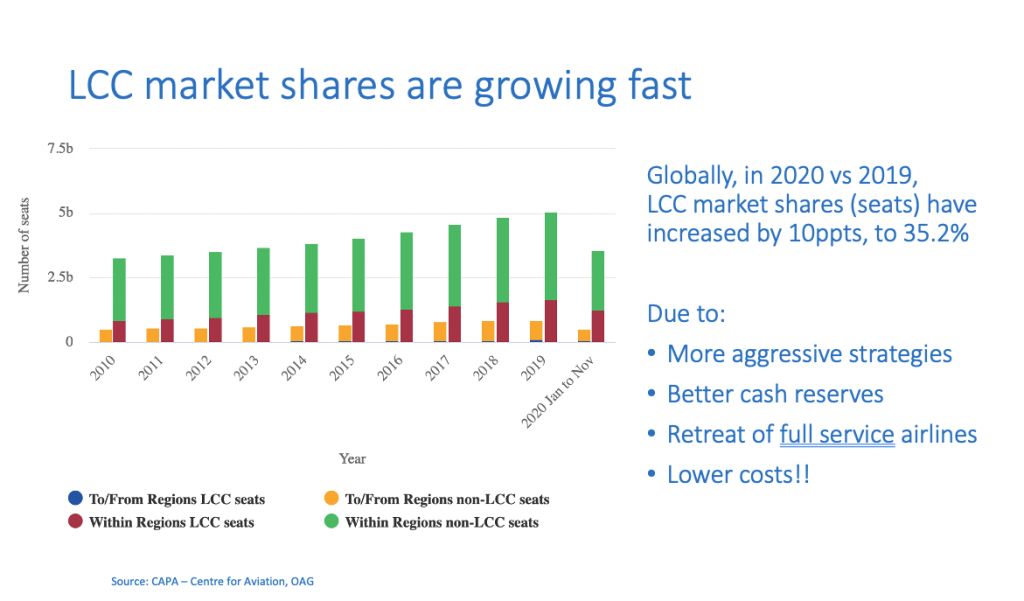 Back to the future

These new, COVID-related, ingredients inevitably will force major change on the global airline structure. But they form an overlay, not a replacement of the previous headline points we were anticipating for the 2030s, the impact of environmental pressures.

Airlines have been enormously conspicuous for their absence during COVID-19. I think we must all agree to that. But as they return to the skies, the environmental chorus will become much shriller than before.

There’s a host of environmental forces all ready to resist a full return to flying. And the new base point is very close to zero. It’ll be reset to that level, if not by governments, by popular pressure. That’s an exaggeration, obviously, but it does mean a diminution of the level of expectation, and reduced level of tolerance for airline expansion.

The pressures will come from corporate and investor pressures on our friends from Amazon, for example, who are taking a responsible position on climate change, and with a climate pledge to reduce to a new status quo in terms of business travel and in terms of all forms of travel.

Nor will flight shaming go away, which was so strong in Europe so long ago in 2019. Emission taxes will continue to grow….

Particularly in Europe, where the alternative does exist, short haul substitution by surface will be promoted strongly.

In the UK, there was talk last year of a flying levy or banning frequent flyer programmes because they encouraged travel.

In the US, the new the Biden administration will accelerate the need for alternative fuels, and its policy actually talks in terms of trying to provide some substitution of air services by building a rail network. That’s been talked about a lot in the US, but it’s a central part of the incoming President’s transportation policy.

And generally speaking, I think probably a renewal of concerns about climate change with the major climate-related events that have affected ordinary lives over the last year to 18 months – fires, floods, cyclones and hurricanes.

It’s quite probable in all these circumstances that once airline activity returns to, say, half of its previous levels, as soon as it becomes widely noticeable again, the opposition will greatly intensify.

This is an interesting and important area for change. Obviously the big GDSs have been massively impacted by the decline in traffic, because their revenues come from unit transaction charges. They were already going through a massive disruption process with the arrival of the New Distribution Capability (NDC) and with the whole challenge to the system with direct selling via airline.com.

Importantly now, the early markets to recover will be the domestic ones, where airlines don’t necessarily need the GDSs so actively because brand recognition is strong, and it’s much easier to sell directly in their home market.

It’s an ideal situation really to bypass GDSs. Now, technology has enhanced the ability for online sales or API sales through agents in domestic markets. So airlines that are well-positioned in this will be very much in the front line of change and disruption.

Internationally yes, it’s still going to be important to be able to distribute through more than just the sort of local direct selling network.

And I would anticipate very strongly that there’ll be more major airline long haul JVs. Restoring key long haul connectivity is going to be difficult, so that governments are likely to be prepared to sacrifice some competitive principles in order to re-establish networks. These JVs will probably be metal neutral, authorised by competition bodies, which means that at each end of any route there will be an airline that does have a domestic market it can sell directly into. And, thanks to the metal neutrality of the JV, the home airline will be happy to sell equally in its respective home market on behalf of its foreign partner.

Digital transformation will be an essential part of adjusting to the future.

In all of these circumstances, digitisation is increasingly important. But first, recognising and allocating resources to the specific area is essential. A recent study from McKinsey stressed the importance of reprioritising to adjust to the new environment.

In their case study, many companies had been exploring moving to WFH. Most of the companies they interviewed had previously anticipated that it would take about a year to make the transition.

In actuality, it took around about 11 days to implement what they called a workable solution. The reason that the companies hadn’t done it before for productivity reasons was simply because the priority just hadn’t been allocated to the change.

Today, that priority had leapt up the scale and achieving the goal became surprisingly simple.

And digital innovation can be a game-changer. Airlines that are liquid, who do have some money and can actually spend money on digitisation will be in a much better position to exercise those opportunities.

Me Elbers argued technology partners not only increase KLM‘s access to investment funds, But also allow it to keep pace with innovation while sticking “to what you’re good at, and that’s running an airline…As an airline, we would not be building our own aircraft”, he says, “so why should we build all our technology ourselves?” See: CAPA Live: KLM CEO straps in for aviation’s bumpy recovery

And the same priority flows through to generating higher cost efficiencies, as well as sales and distribution and leveraging off activities like frequent flyer programmes, which, as we’ve seen in this environment, have become very, very useful.

Progressive network transformation was the third point in Airline Leader that we looked at for the next decade ahead. There is an enormous number of long haul narrowbody aircraft on order, and once the MAX gets back into operation as well, that number will grow.

The LCCs don’t have the monopoly on these aircraft, but each of the major markets will be receiving large numbers of long haul narrowbody aircraft, A321s, MAX’s and the like.

The effects will be transformational.

This was an evolution that was already happening before. COVID is going to accelerate that process, particularly because, in many cases, passengers will prefer to be flying point-to-point rather than going through a hub.

As I mentioned in last month’s CAPA Live, global market shares of LCCs are growing fast. The network transformation is not just about LCCs, but it’s important because they’re actually growing month-on-month as well. Globally, their market share is up to 35% of all seats in the marketplace, up almost 4%.

The world’s low cost carriers have mostly been more aggressive with their COVID-19 strategies. They have better cash reserves in most cases, and the full service airlines have retreated more. But also, the LCCs have lower costs, so they can perform better in a low yielding market.

In the US as well, there has been a 4.5% increase year-on-year, in terms of LCC market shares, and the already high 45% share in Europe has increased by almost 2% as well, just in this year.