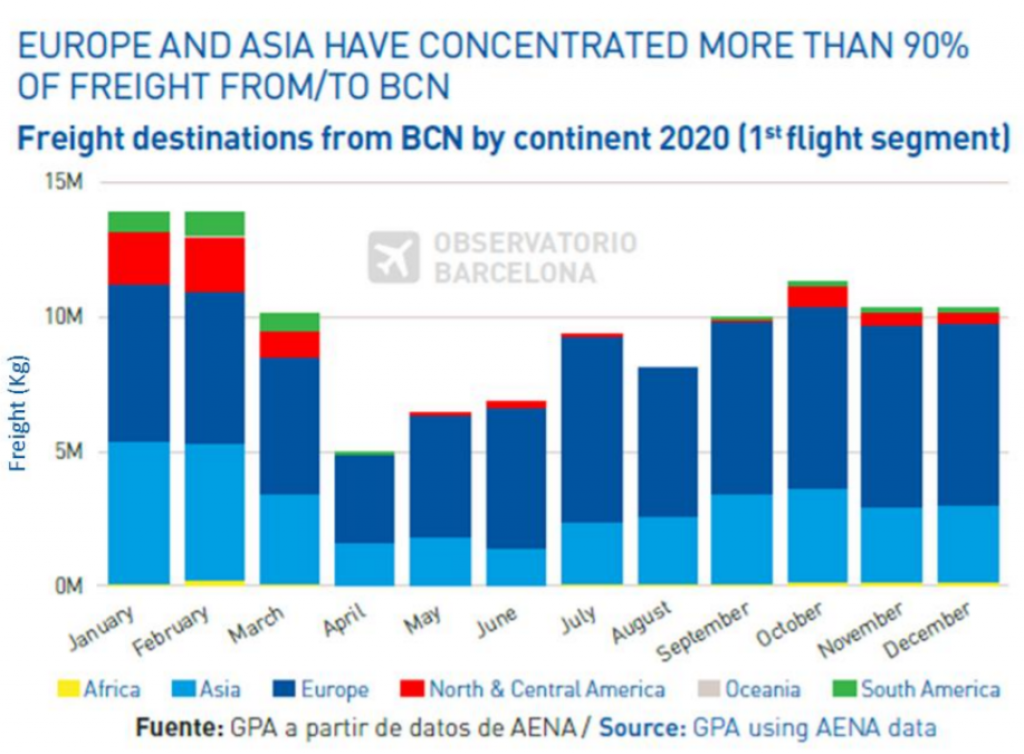 Catalonia continued to lead the country in air cargo in pharmaceuticals and chemicals in 2020, despite the crisis.

– The pharmaceutical and chemical sector became the second most important sector in terms of air cargo volume in Catalonia and was the only segment to grow in 2020 (+ 0.7%).

– The integrator companies DHL, UPS, and FedEx together achieved a share of over 34% of the airport’s total, increasing this indicator by more than 12 points compared to the previous year.

– Europe and Asia are the regions that concentrated more than 90% of cargo at BCN due to the loss of connectivity with North and South America from the second quarter of the year.

Barcelona, February 16, 2021 – Josep Tarradellas Barcelona – El Prat airport closed 2020 handling 114,000 tons of air cargo, a decrease of 35.4% compared to the previous year. This negative trend was generalized in most European airports with a ‘mixed’ business model, i.e., not exclusively focused on the cargo business. The economic slowdown during some months of the year as a result of the health crisis, as well as the massive cancellation of intercontinental flights at Barcelona airport, led to unprecedented negative results during some months of the year. Zaragoza airport (144,000 tons in 2020), with a business model based on pure freight (highly dependent on a single customer, Inditex), and unaffected by the cancellation of intercontinental passenger flights, closed the year in second place in the ranking of the AENA network, second only to Madrid (401,000 tons). However, Barcelona remained in the top-25 European cargo airports, according to ACI Europe data.

The pharmaceutical and chemical sector ended the year with positive growth in 2020, positioning itself as the second sector moving the most air cargo in Catalonia.

Catalonia continued to lead the national ranking of air cargo in pharmaceuticals and chemicals in 2020, representing 47.2% of the national total. This sector became the second most important sector and was the only one to grow in 2020 (+ 0.7%). The first position follows the fashion/textile sector, which continued to lead Catalan airfreight, although its year-on-year decreased in 2020 (-36.9%).

Other sectors such as metal manufactures (-12.6%) and electrical and mechanical products (-30.1%) suffered more moderate falls. Finally, the food sector was the hardest hit by the crisis, recording decreases of 44.9% compared to the previous year.

DHL and UPS are in first and second place in terms of volume of cargo handled in Barcelona.

In 2020, integrator companies took the lead in air freight to Barcelona. DHL (17,300 tons and 15.1% share) and UPS (17,100 tons and 15% share) obtained the first and second positions in El Prat, respectively. Their express business, which is more oriented to e-commerce, recovered much faster than the traditional air cargo business. In this regard, Middle Eastern airlines such as Qatar Airways (14,100 tons and 12.3% share) and Emirates (11,500 tons and 10.1% share), typically in the top positions in recent years, closed 2020 in third and fourth position, respectively.

European and Asian regions accounted for more than 90% of air cargo departing from/arriving in Barcelona.

European destinations gained special prominence during 2020, obtaining a 59.9% share of the total number of destinations. This indicator increased substantially with regard to the previous year (40% share in 2019). Asia maintained a significant volume of cargo (30.7% share), thanks to companies such as Qatar Airways, which virtually did not stop their activity during the most complicated months of the year. North and South America regions were the most affected, due to the loss of direct connectivity from the second quarter of the year.

Charter flights increased their presence in Barcelona, especially during specific months of the year.

Charter or non-scheduled cargo flights increased their presence at Barcelona airport during 2020, obtaining a 9.6% share of total cargo handled. This same indicator was 3.8% in 2019. During April, air cargo on these types of non-scheduled flights accounted for 31.2% of the airport’s total, due to the great need to import medical supplies during the worst months of the pandemic, as well as because of the lack of space available in the holds of scheduled airlines.