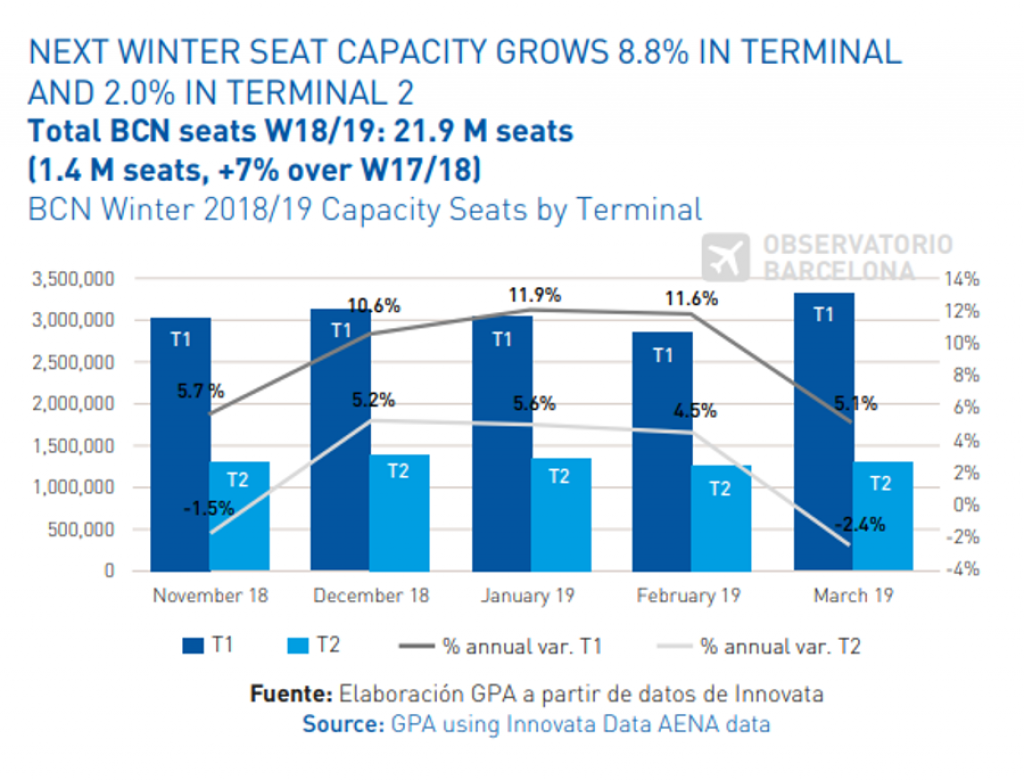 1.23M MORE SEATS FOR BCN’S TERMINAL 1 NEXT WINTER AND 131K IN TERMINAL 2 BCN W18/19 Seat Variation by Terminal and month

Airlines offer almost 1.4 million net extra seats in Barcelona for the winter season 2018-2019 (from October 28, 2018 to March 30, 2019), an increase of 7% over the previous year. The large growth in seats is mainly due to the growth of Vueling, +11% (831,000 more seats compared to the previous year). Then, LATAM, thanks to the change in the type of aircraft of greater capacity –with 310,000 seats, it almost triples the offer of the previous year–, Ryanair, which grows 6% in capacity and Laudamotion (+82,000), new Ryanair’s subsidiary that operates in Austria and Germany. In contrast, the airlines that decrease their seat offer in the winter season at Barcelona airport are Qatar Airlines and Plus Ultra (due to the termination of operations). Airlines increase capacity to most countries. The most notable increase in capacity is towards the domestic market, with almost a third of the total increase in seats, followed by consolidated markets like Austria, Great Britain, Portugal and Italy. However, the most important relative variations are in Korea, Malta and Austria.

Regarding monthly seasonality, the increase of the new offer is concentrated in the months of December to February (with an annual variation around 9%). It is worth mentioning that from November 6th to November 25th, Adif will drill with a tunnel boring machine under the main track for the construction of the new rail access to T1. These works temporarily leave this track inoperative, although it seems that this has not translated into a lower offer in November (with a growth of 3.4%). March is the month with the lowest relative growth of the season seat offer (+2.7%), but the highest in absolute terms (4.7 million seats offered).

According to terminals, the capacity of terminal 1 grows 8.8%, 1.2 million more seats, exceeding the 15 million seats offered. Terminal 2 grows at a slower pace, +2.0% with 131,000 more seats, which represents an offer of 6.7 million seats. By months, both T1 and T2 concentrate their new offer in the months of December, January and February, with 74% and 100% of the new seats, respectively. Nevertheless, while T1’s capacity increases in the months of November and March, at a lower rate, T2 decreases its capacity with respect to the previous year.