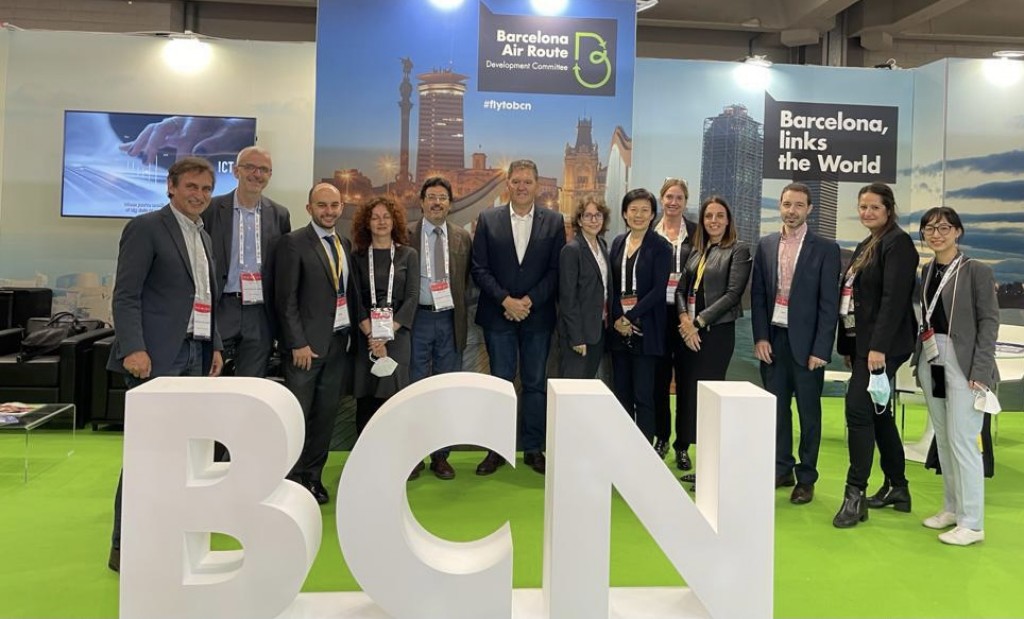 Intercontinental routes show their optimism towards connecting with Barcelona

Barcelona, 14 October 2021 – The Barcelona Road Routes Development Committee (CDRA) participated, as usual, in the World Routes 2021 held in the Italian city of Milan, between 10 and 12 October. World Routes is the benchmark event that brings together airlines, airports, and other interested parties to discuss future global air services. On this occasion, the Committee met with more than 20 airlines and airports from around the world.

In this edition, the main focus of the fair was the recovery of connectivity and consolidation of routes, as a result of the serious crisis that the sector suffered during 2020. It is worth remembering that, currently, the destinations served from Barcelona to Europe, North Africa, and the Middle East have almost recovered 100% in terms of number of destinations. However, other regions, North and South America, are expected to recover almost all of their destinations by the 2022 summer season compared to 2019.  Asia will be subject to its reopening depending on the restrictions due to the pandemic.

In the particular case of Barcelona, the specific objectives of the meetings held were to monitor the intercontinental routes that have not yet been recovered. Special emphasis was placed on the North American market, where there are currently six routes to the United States and Mexico, but destinations such as Boston, Chicago, Philadelphia, Washington, Charlotte, Montreal, and Toronto, all of which were served in 2019, are still missing.

The Committee explained very clearly to the different airlines some key aspects that demonstrate the positive trend of recovery of activity in the city and the region, especially in the leisure travel segment. In this sense,  the reopening of cruise ship operations was highlighted, which will increase steadily until the end of the year.

This aspect caused special interest in Canadian airlines, as this type of activity is key to their market. Specifically, airlines such as Air Canada, Westjet, and Air Transat have confirmed their return to Barcelona for the upcoming 2022 summer season, offering direct flights to Montreal and Toronto.

Meanwhile, North American airlines such as American Airlines and Delta Airlines emphasised the positive evolution of the routes that are currently operating from Barcelona, such as New York and Miami. Among other factors, the travel policy of the Spanish state, which has clearly defined and unchanged the guidelines for access to the North American traveller, has facilitated the promotion of routes to this market.

In relation to possible new routes that may be created in the medium-long term, the Committee also held meetings with other airports in the United States such as Denver, Austin, and Orlando, as well as in other parts of the world, such as Damman and Riyadh, the latter being the capital of Saudi Arabia.

On this occasion, all the members of the BARDC – Aena, Barcelona City Council, Barcelona Chamber of Commerce, the Generalitat [Government of Catalunya] – including senior representatives such as Isidre Gavín (Secretary of Infrastructures and Mobility of the Generalitat [Government Catalunya] and president of the CDRA) and Pau Solanilla (Barcelona City Council’s Commissioner for City Promotion) participated in the event. Representatives of the Catalan Tourism Agency and Turisme de Barcelona also took part. The organisation received the usual support from organisations such as Acció and Port de Barcelona.

Isidre Gavín confirmed, after his participation and conversations with different airline companies, that “the business segment is the one that is finding it most difficult to recover, although the airlines have begun to detect the willingness of this type of traveller to travel again”.

The CDRA has continuously attended the World Routes since its origins with the collaboration of different organisations, in order to reinforce the visibility of the destination worldwide and to promote new intercontinental routes to Josep Tarradellas Barcelona-El Prat airport.

During the next week, from 18 to 20 October, the Virtual World Routes will be held for all those airlines that were not able to participate in person, mainly due to restrictions imposed by Covid. It is planned to have an agenda with mainly Asian airlines and some North and South American airlines.