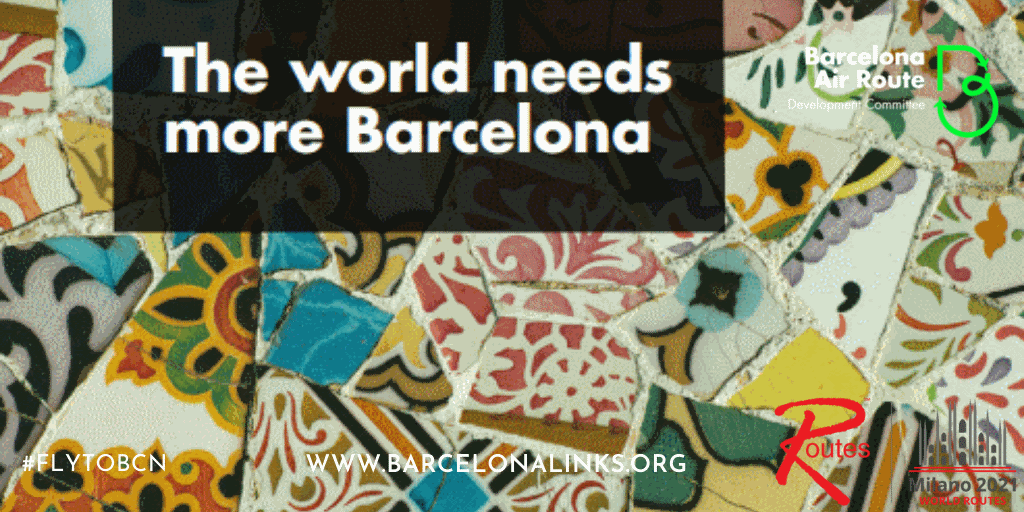 During 2021, the Josep Tarradellas Barcelona-El Prat Airport has already recovered 25 of the 47 intercontinental destinations of 2019.

Barcelona, 8 October 2021 – The Barcelona Air Routes Development Committee (BARDC) will participate in the 26th edition of the World Route Development Forum to establish contacts and contribute to the recovery of international air traffic at Josep Tarradellas Barcelona-El Prat Airport. The event, which will take place from 10 to 12 October in the city of Milan, is one of the main meeting points bringing together in the same space airlines, airports, and other organizations and companies interested in the airport sector to discuss future world air routes.

The event, which is key to recovering the image and intercontinental routes that have not yet been restored, is back to normal again after not being held last year due to the impact of Covid-19.

In this sense, the BARDC delegation will continue to have its own stand, as in previous editions, which will be attended by its four members: Government of Catalunya – Ministry of the Vice-presidency, Digital Policies and Territory; Aena; Barcelona City Council – City Promotion and Barcelona Chamber of Commerce; as well as the Catalan Tourism Agency and collaborators such as Acció, Port de Barcelona, and Barcelona Tourism.

It is worth remembering that Josep Tarradellas Barcelona-El Prat Airport will start 2019 with a record number of passengers, over 52 million, and 47 intercontinental destinations, but the mobility restrictions established due to the impact of Covid-19 sentenced the upward trend recorded in recent years. Thereby, Isidre Gavín, Secretary of Infrastructures and Mobility of the Government of Catalunya and President of the BARDC, said that in the face of the impact of the pandemic on the airline industry “we realized that to overcome this enormous challenge our main asset was our ability to work together as a multi-institutional team, by making an even greater effort to support the return of airlines and to try to exploit customized opportunities such as air freight and new ad-hoc routes”.

As of today, the European network is fully restored in terms of destinations, and connections to the Middle East, Africa, and North America are being restored. Specifically, 25 of the 47 intercontinental destinations that were operational in 2019 are already active.

An agenda of meetings to re-establish links with the North American market.

The BARDC ‘s work program at the World Routes Forum2021 includes an agenda of meetings with airlines and airports in order to further develop the recovery of pre-pandemic routes, as well as future links following the lines of the latestBARDC Strategic Plan 2021-2024.

Currently, one of the BARDC ‘s main objectives is to recover high-impact connectivity, which corresponds to destinations that are key world centers for economic, cultural, major tourism, business, and high social impact reasons. A recovery that involves not only having direct connections but also regaining the companies and weekly frequencies that existed before the pandemic.

For this reason, following the announcement of the reopening of the borders with the United States, it is important to regain the connections already established previously with Chicago, Washington, Philadelphia, Los Angeles, and Charlotte. This goal has also been set for Asia, pending its reopening, so as to once again establish connections with Beijing, Shanghai, Hong Kong, and Seoul.

The airport is committed to the health measures adopted for the safety of employees and passengers, as recognized by various international aviation authorities. In recent months, the facilities have obtained certification from the Airport Health Accreditation (AHA) program of the Airports Council International (ACI), accrediting it as a safe airport; the five-star rating from the ‘COVID-19 Safety Rating’ program of the airport research and studies consultancy Skytrax; and, lastly, the ‘COVID-19 Airport Excellence Awards’ from Skytrax, consolidating the airport as a guarantee of a safe, top-level passenger experience.