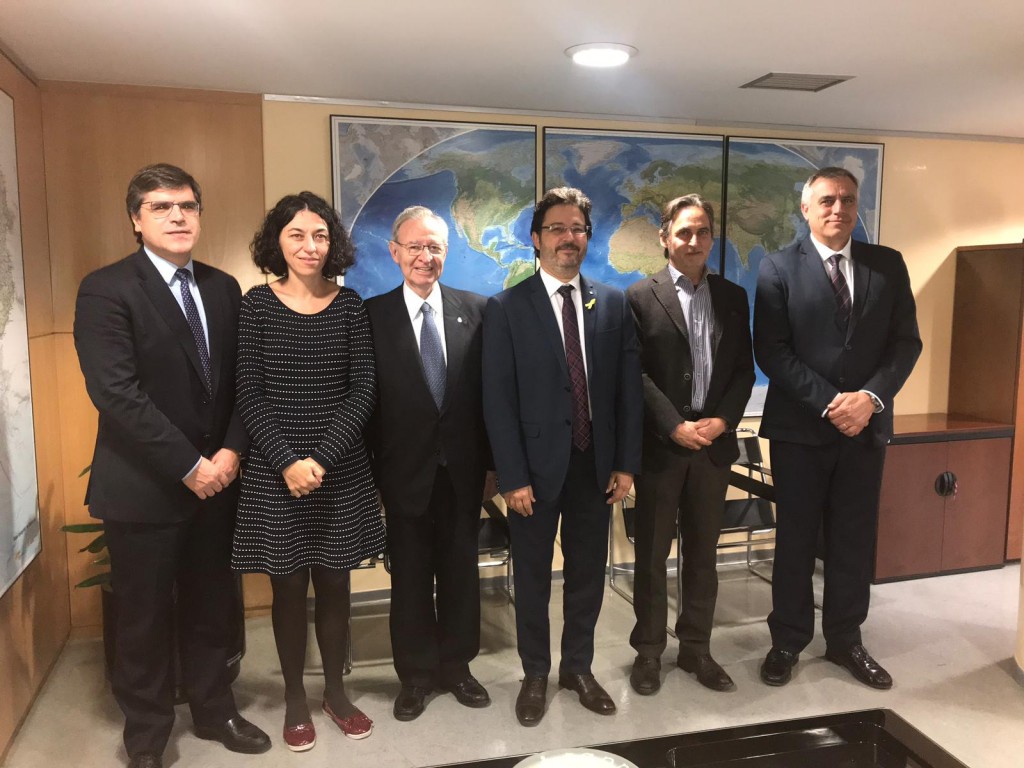 The BARDC consolidates as a European reference for institutional cooperation.

The Barcelona Air Route Development Committee of Barcelona El Prat Airport (BARDC), formed by Government of Catalonia, Chamber of Commerce of Barcelona, Barcelona city Council and AENA , represents a unique window of presentation to attract new companies and it is still working on some great destinations that are not yet served: Tokyo, Delhi, Bangkok and Mexico. In general, the Asian and North American markets are the most important work area.

The BARDC, founded in 2005, agree on the renewal of the new agreement between the four institutions on December 13, 2018. The Secretary of Infrastructure and Mobility of the Department of Territory and Sustainability of the Government of Catalonia & also President of BARDC, Mr. Isidre Gavín; the Director of international economic promotion of the City Council of Barcelona,  Mr. ​​Mario Rubert; the President of the Chamber of Commerce of Barcelona, Mr. ​​Miquel Valls and, the director of the Airport of Barcelona – El Prat, Mrs. Sonia Corrochano, agree on the renewal of the BARDC agreement for 4 years over 13 years of all fans and fans of a positive balance.

The foundational objectives are still in force and many actions had carried out for each of these objectives:

In this new stage, now more than ever, some goals take more strength. For example, loyalty actions that help us to add frequencies by an airline or get it to fly year-round and not seasonally are key objectives to consolidate the current offer.

A new objective of the BARDC: to promote the sector of air transport and travel services

The Barcelona – El Prat Airport and the city of Barcelona as a hub for innovative business attraction and as the headquarters of several airlines is developing a fabric that linked to the valuable travel and air transport sector. The BARDC believes that this sector can add value to the future airport model and further loyalty to airlines. According to the Strategic Plan 2018-2019 of the CDRA, more than 125,000 people work linked in some way in the airport and air traffic (direct, indirect, induced and catalytic positions). For all these reasons, the air transport sector and routes are included in a new additional BARDC object.

On the other hand, the BARDC considers it especially valuable that companies, such as Norwegian and Level, establish their base of long distance operations in Barcelona, ​​and create offices and places of employment with high value added by the territory. This fact is key because it allows growing long-distance routes much more quickly and contributing more value to the airport model. This is the phenomenon of Low Cost Long Haul, where Barcelona is strongly positioned.

Finally, the air cargo has also become an important and key phenomenon for many industrial exporting sectors in Catalonia, such as the pharmaceutical-chemical sector, that of electrical and automotive manufacturing, food and, of course, the textile sector that is the largest volume of air cargo. With all this Barcelona has positioned itself among the 20 largest airports in Europe in air cargo.

The airline Level has announced a new route to Santiago de Chile for the summer season and also a new route to New York (JFK). West Jet will start flying to Toronto. Also worth noting is the great bet of Etihad that has begun to fly in November 2018 and will convert its flight in the diary from summer 2019.

1% of world cities generate 40% of global traffic. Barcelona is in this prominent group. The BARDC is convinced that thanks to its promotional work done with transparency, coordination and setting common objectives it can ensure that the city and its territory of influence remain globally competitive.