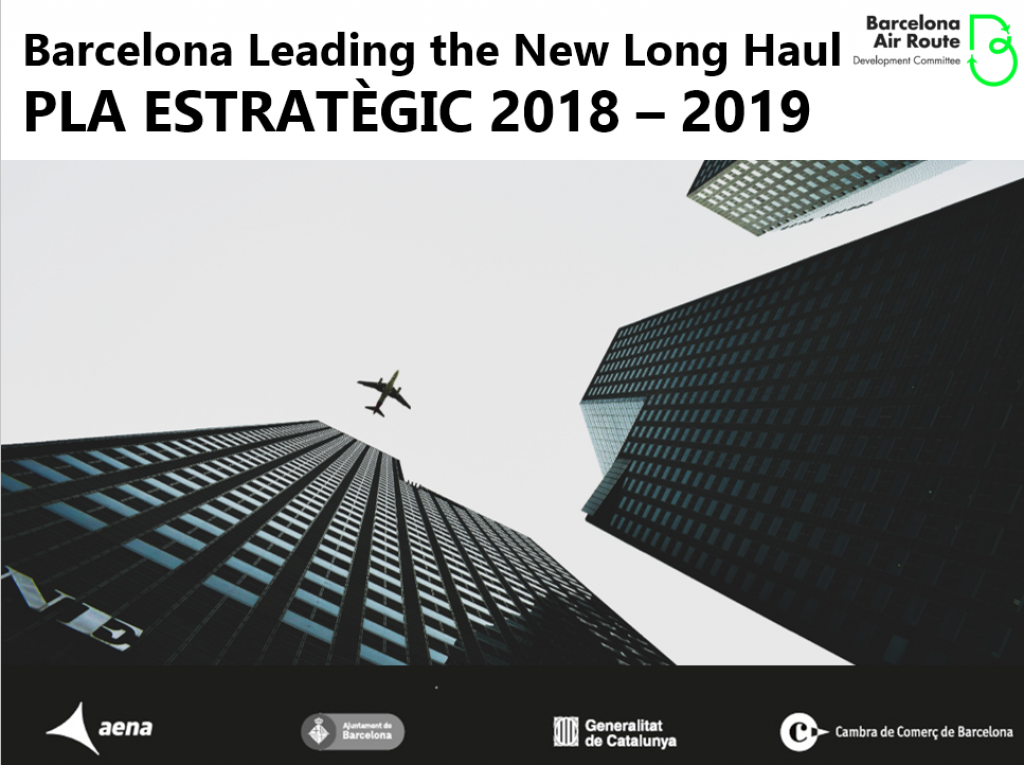 Intercontinental traffic at Barcelona Airport grows 29% in the period 2015-2017.

The Secretary of Infrastructure and Mobility of the Department of Territory and Sustainability of the Government of Catalonia and Chairman of the Barcelona Air Route Development Committee (BARDC), Ricard Font; First Deputy Mayor of the City Council of Barcelona, ​​Gerardo Pisarello; the President of the Chamber of Commerce of Barcelona, ​​Miquel Valls; and the Director of Barcelona-El Prat Airport, Sonia Corrochano, presented the BARDC’s balance for 2017 and the Strategic Plan of the entity for the 2018-2019 period.

The activity of the BARDC, made up of the Government of Catalonia, the Barcelona Chamber of Commerce, Barcelona City Council, the Government of Catalonia, and AENA, has contributed to transporting 7,221,297 intercontinental passengers to Barcelona-El Prat Airport during 2017 – considering direct (2,649,444) and indirect (4,571,853) passengers – thanks to the new routes and frequencies that have been created. Thus, the BARDC continues to fulfil one of its founding objectives: to promote intercontinental flights from the airport in the Catalan capital.

With the collaboration of the BARDC, several airlines have opted for Barcelona-El Prat Airport and have begun to operate new intercontinental flights over the last few years, which has brought about a significant increase in the supply of these links. Thus, in 2017, Barcelona-El Prat Airport achieved a new record of intercontinental routes, reaching a total of 45 destinations.

For the current year, Barcelona is expected to achieve new intercontinental links, such as Boston with Level (which is already operating) and Seoul with Asiana (as of August), and to consolidate several of the existing routes by expanding capacity with the use of larger aircraft and an increase in frequencies, such as Qatar Airways, United Airlines, and Korean Air flights. In this sense, a greater number of frequencies makes the routes more attractive for business passengers, thereby contributing to the economic development of Barcelona and Catalonia.

In this regard, the BARDC also presented the main lines of its Strategic Plan for the 2018-2019 period today. This document is the result of the collaboration agreement between the Government of Catalonia, AENA, Barcelona City Council, and the Barcelona Chamber of Commerce, signed in 2008, which facilitates institutional collaboration to promote the city of Barcelona, achieve more direct intercontinental connections, and boost the city as an economic and tourist driver.

The plan determines the most strategic markets and countries for the Catalan capital, its airport, and the rest of Catalonia, in the coming years. When defining long distance routes, the nature of current traffic flows, competing airports, the level of internationalization of Catalan companies and the importance of the city of Barcelona as a tourist destination and of first class congresses have been analysed, among other elements. This strategic plan also includes the analysis of companies that potentially have the capacity to launch the routes, as well as the study of airports that are competing with Barcelona to get these routes.

This Plan is, therefore, a comprehensive study of all the most important unserved destinations or those that could be better served, and will guide the BARDC action plans for the 2018-2019 period. The analysis of the Strategic Plan determines that intercontinental traffic remains concentrated in a limited number of global cities that are large economic and influential centres. Thus, 1% of the world’s cities account for 40% of world traffic and Barcelona is within this 1%. However, Barcelona needs to strengthen its connection with greater frequencies, and minimize the seasonality of traffic with some of these cities; and of course achieve direct routes that are not yet available. In this new phase, Barcelona alongside the BARDC intends to consolidate its position within this global network of global cities and thus be able to maintain its own economic, social, and cultural dynamism.

In this way, two target destination categories have been determined. First of all, those who do not have a direct offer and have unsatisfied demand that flies through an alternative hub: these are global cities of great importance. Next, as a second category, destinations are listed in cities and large global economic centres that are critical to reinforcing connectivity beyond the direct routes that are already available. The desire with these destinations is to increase the number of frequencies to make them more attractive to business passengers, as well as to reduce their seasonality. Therefore, the objective is twofold: on the one hand to obtain new routes; and, on the other hand, to consolidate and provide higher quality to the existing ones.

To continue advancing in this direction, the members of the BARDC wil continue to participate in the Asia Routes and World Routes, sectorial congresses where business opportunities are presented to airlines and airports. At the same time, in addition, external missions will also be carried out to show the potential of certain routes to airlines and key agents.

Since the creation of the BARDC in 2005, the evolution of intercontinental traffic in Barcelona has shown constant growth, both in number of passengers and in routes and direct frequencies.

Over the last 12 years, the number of destinations has tripled (from 17 to 45). In this regard, it should be noted that direct flights have been achieved for many of the destinations identified as strategic in the previous Strategic Plan, corresponding to the 2016-2017 period. Specifically, in this period, flights were launched to 11 new destinations. For example, direct flights have been made to Seoul (previously offered only as a charter), Shanghai, Washington, San Francisco, Chicago, Los Angeles, Miami, and Lima. Meanwhile, in 2016, Emirates and Turkish Airlines launched new cargo flights, as well as increased frequencies of the Delta flight to New York, and greater capacity, with larger aircraft, by American Airlines and Emirates. However, notable destinations have also been reached such as Tehran and Banjul, among others.

Likewise, the number of weekly intercontinental frequencies has not stopped rising and now stands at 286 weekly; in 2015 it was 234. The number of seats has also multiplied by 6: there are currently more than two million seats offered in Barcelona with intercontinental destinations.

Direct intercontinental traffic already exceeds 2.6 million passengers. The important growth of direct passengers has also stimulated the indirect passage, which has reached up to 4.5 million users. On the one hand, this highlights the work carried out jointly by the four institutions making up the BARDC to promote the growing intercontinental demand of Barcelona; ​​but it also shows that the work developed by the BARDC is still necessary.

It should also be noted that in 2017 the BARDC organized the World Routes conference in Barcelona, the most important worldwide event for route development professionals. In particular, the airline attendance record was broken with 275; there were over 2,600 delegates from 130 countries, 610 airports, and 90 tourist authorities. In total, more than 13,000 meetings were held between airlines and over 2,000 at stands with airlines, airports and tourist/government authorities.

The work carried out at the World Routes has resulted in several new flights: to Shanghai with Air China, to Dallas with American Airlines, to Boston with Level, to Seoul with Asiana, an increase in frequencies to Seoul with Korean Air, and the expansion of the Cathay Pacific flight throughout the year.