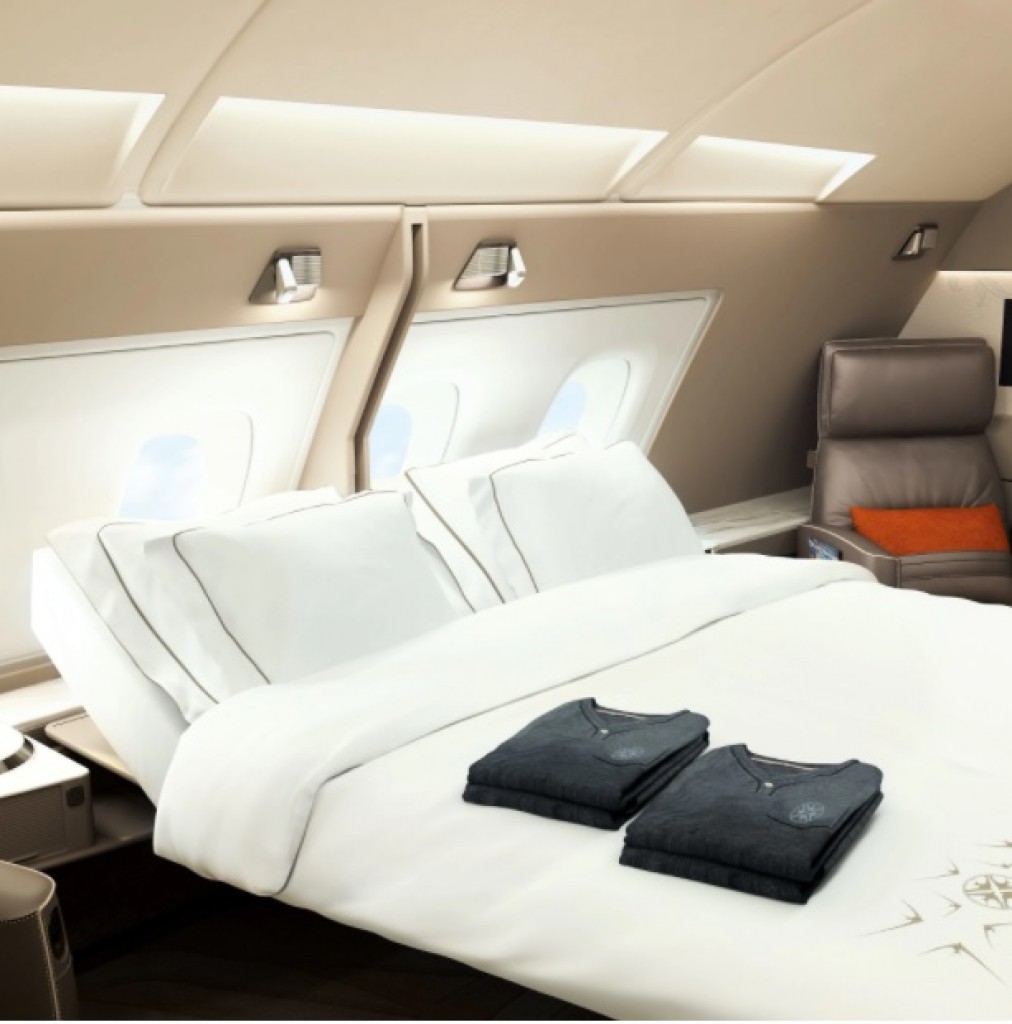 Following an $850m investment and four years of development time, Singapore Airlines has unveiled its new premium cabin products, including new first-class ‘Suites’ that are set to drastically redefine the in-flight experience enjoyed by the airline’s most valuable passengers.

To be fitted to Singapore Airlines’ A380 aircraft from next month onwards, the new suites will be tucked within the front section of the upper deck. There will be just six cabins arranged in a 1 x 1 configuration, rather than the 12 first-class seats offered up to this point. Speaking at yesterday’s launch, Singapore Airlines’ CEO Goh Choon Phong described  the new product as offering “more space, greater privacy and more attention to personal details”.

Measuring about 50sq ft (a significant jump from the 30sq ft offered previously), each suite has its own separate full-flat bed (measuring 27 inches by 76 inches) with adjustable recline and a full-length personal wardrobe spacious enough to store cabin baggage. A plush chair, upholstered in Poltrona Frau leather, is the first in a commercial aircraft to swivel and offers adjustable lounging positions; the meal table is stowed in a side ledge.

While it was previously necessary for first-class passengers to stand up so that their seats could be converted into a flat bed, the enhanced product does away with that inconvenience. Although the beds are comparable to small singles, couples who would like to cosy up on a double bed may opt to conjoin the first two Suites of each aisle to create a double bed.

Other simple structural cabin improvements include an enhanced credenza with a pop-up vanity compartment and a handbag compartment, as well as enhanced lighting features including a table lamp on a feature wall. In place of a 24-inch screen, passengers have a 32inch high-definition touchscreen monitor that can change position to offer optimal viewing conditions whether watched from the seat or bed.

If you’ve found it frustrating to have a film end abruptly as your flight touches down, the debut of myKrisWorld should improve the situation significantly. Members of the airline’s frequent flyer programme, KrisFlyer, may bookmark and resume content as well as customise and save entertainment preferences for subsequent flights. While this option is available to passengers in all classes, Suites guests will be able to control the lighting in their cabin and even save the lighting preferences for future flights. As part of the rollout, high-speed in-flight Wi-Fi will also be made available for a charge on board the world’s first GX-enabled A380 aircraft.

With the makeover, Suites will also offer a series of enhanced experiences hand-in-hand with Lalique. Plush beddings, amenity kits, pyjamas, slippers, eyeshades and socks come from the French luxury house, while Lalique-designed crystal glassware will be used alongside Wedgwood crockery during meals service.

In line with its new From Farm to Plane initiative announced on October 11, Singapore Airlines as part of the launch also reaffirmed its commitment to use more sustainable ingredients in in-flight meals and to support local farmers. The new menus, which are created under the guidance of the International Culinary Panel, will incorporate more local ingredients like farmed barramundi from Kuhlbarra, Singapore’s largest commercial fish farm.

The upgraded Suites product will launch on five new A380 aircraft entering the fleet on the Singapore to Sydney route from December 18 (flight code SQ221). Over the next three years, retrofit work will take place on the airline’s 14 existing A380 aircraft.

Also announced at yesterday’s event were improvements to the airline’s A380 business-class product. As is now customary, seats recline into fully flat beds and here again couples can fuse their seats to create a shared double bed. (A similar feature was recently revealed during the launch of Qatar Airways’ business-class QSuite.) Singapore Airlines’ A380 business-class cabins will also offer enhanced storage space.

The Singapore Airlines Suites launch follows a series of high-profile premium-cabin debuts and redevelopments from competitor airlines. In 2014, Abu Dhabi carrier Etihad launched a ‘better than first class’ Residence, containing a bedroom, small lounge and WC with shower; Dubai’s Emirates this year revealed an upgraded premium product including an improved bar area. Currently the world’s largest operator of A380 and Boeing 777, Emirates is set to announce its new First Class product at the Dubai Air Show later this month. While some in the aviation industry suggest first-class cabins may eventually be phased out of many carriers’ inventories, for now it’s a particularly exciting time to turn left.

Singapore Airlines return first-class Suite fares from London to Sydney, via Singapore, cost from £9,500. The new suites will launch on the Singapore to London route in 2018. More information  on the new A380 cabin products can  be found at A380.singaporeair.com.