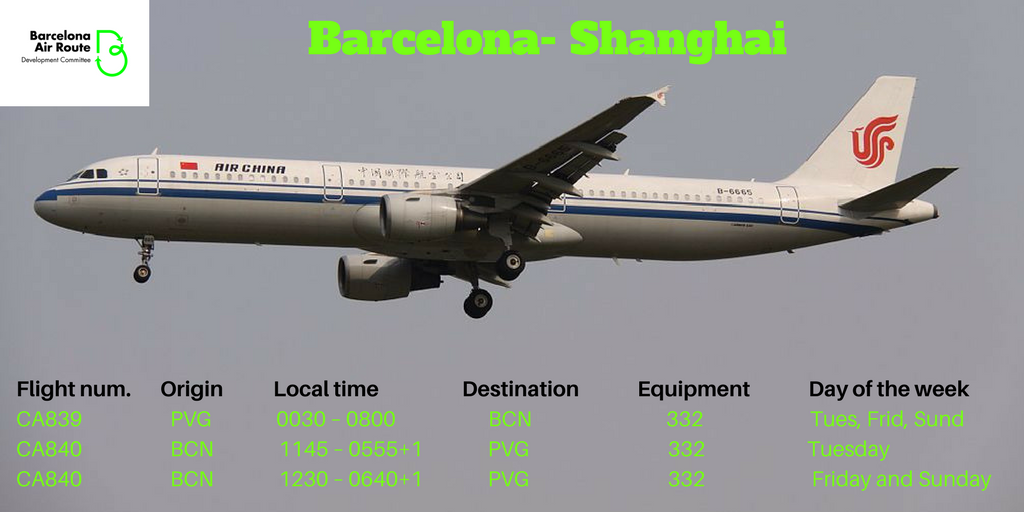 Air China launches its direct flights between Barcelona and Shanghai

Air China opens on the 5th of May its second route to China from Barcelona-El Prat Airport. It will operate it with a direct flight to the country’s e

Barcelona, 05th of May 2017 – Air China, the leading company in the Asian market and member of Star Alliance, opens on the 5th of May its second route to China from Barcelona-El Prat Airport. It will operate it with a direct flight to the country’s economic capital, Shanghai, which will take off three times a week with a schedule tailored to the needs of the business sector and with interests in this prosperous city and its surroundings.

The flight will operate one of the most modern aircraft of Air China, an Airbus 330-200 with 16 Business and 239 seats in economy class.

These schedules have been specially programmed not only to adapt to the needs of business passengers, but also to allow a greater number of connecting flights to Shanghai airport. Thus, business travellers will arrive in Shanghai on Monday early morning and again in Barcelona on Friday of the same week.

Also, from the Shanghai Airport passengers will have many international connections in Japan, Taiwan, Australia and New Zealand, and the domestic market in Chengdu, Wenzhou, Fuzhou and Guangzhou.

With this new destination, the second that Air China operates from El Prat, the airline will cover a route which has a great demand by various social and economic sectors of Barcelona due to special business links with Shanghai and its surroundings.

The new flight is the result of a thorough analysis of the market which shows a growing passenger demand over the past five years between the two cities. The compound growth rate (CAGR) of air traffic between Barcelona and Shanghai has been 11% since 2010 and last year, the figure increased by 19% to over 100,000 passengers indirectly. In addition, the traffic of passengers traveling in business class has grown to 9% in 2016.

To welcome this new route, Air China has launched promotional fares to travel to Shanghai for the first time from Barcelona in a nonstop flight. The tourist rate class -always round trip with taxes included- can be purchased from 443 euros, while the Business, from 2,043 euros.

Air China opened just three years ago and also just on the 5th of May, its first route from Barcelona to China, particularly to Beijing. Since then, these flights (four weekly frequencies with technical stop in Vienna) have had a large demand and have satisfied a route not covered. Now, with the opening of this direct flight to Shanghai, Air China continues its commitment with the Barcelona-El Prat airport.

Shanghai is one of the centres of economic, social and global and indeed the type of traffic expected will be largely business. Some of these passengers will travel in business class or premium (8.5% of total passenger according to historical data).

We must also remember that China is the first origin or destination of the cargo in Barcelona.

The city of Shanghai has always been a priority objective of the Committee Strategic Planning and since long time ago is working in order to get an airline that finally operated the route. The interest drifts from the large group of Chinese that live in Catalonia, from the Catalan companies that have interest to work in China, from the interest of tourism and the growing interest of the Chinese to invest in Barcelona and Catalonia in general. The three institutions City Council, Government of Catalonia and the Barcelona Chamber of Commerce have conducted countless actions, projects and assignments that make more links between Barcelona, Catalonia and this city.